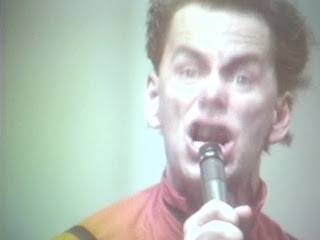 In 1977 video artist and teacher Joe Rees had a vision well ahead of its time.  As an artist, Joe saw the future of the marriage of video and music. He also saw the need for an alternative to the conservative constraints of museums and conventional art galleries.  Breaking with convention, Joe founded Target Video.
Soon, like-minded artists joined with Joe to realize Target Video.  Artists of all kinds were invited to perform at the 12,000 square foot art studio known by everyone as, “Target.” DIY, punk rock and performance art reigned.  Target Video not only taped bands at the studio but also in clubs, at parties and on the streets of the world when music television was nonexistent.  Joe Rees, Jill Hoffman, Jackie Sharp, Sam Edwards and a host of others collaborated over the years with performers as widely known as the Ramones, and as obscure as French punks, Silence Hospital. As a result of the vision and love for underground music and art a massive archive was created.
More than mere documentation, Target Video became synonymous with an editing style uncommon at the time.  Using fast cuts juxtaposing images of the military jets, punk bands and crowds, Joe created the Target montage.  These visual political statements set to music together with band performances, became the basis for Target shows.  Joe, Jackie and Jill produced the shoots and toured Target Video around the U.S. and Europe. In France kids watched Target Videos for 8 hours straight in stores and disco ballrooms alike.  In L.A., the Whiskey was crammed for Target’s debut show. In Rome, Target mesmerized outdoor crowds at the ancient Coliseum.
As part of the California underground scene, Target’s black building was a clubhouse: three floors of video, editing and recording studios; magazine publishers; graphic artists; cartoonists and punks. With its aqua and acid-green linoleum floor and punk rock jukebox Target’s studio was home to after-hours parties, performances, even a wedding reception.  Everyone showed up for great music, great videos and a great time.
Shoots began when the cases of Bud were in place. The scene grew to DJ's spinning punk rock, reggae or roots, depending on the mood.  On the foot-high stage performers blasted through their set.  Music, performance and immediacy were always paramount. Target Video captured the scene in all its raw, unrefined clumsiness. Sometimes it's not a pretty picture.
Target Video documented an explosive era in music, art and visual presentation. Target preserved a place in music history for bands like the Screamers, the Avengers and the Dils, and captured the Talking Heads, Iggy Pop, the Cramps and more in classic early performances.
There are hundreds of stories and shows from the Target scene. This is Target Video.