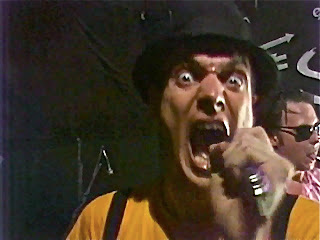 Don Vinyl of the Offs
The next Target Video show will be on July 29, 2010 at the Silent Movie Theatre on Fairfax in Los Angeles.  This year we are part of Allison & Tiffany Ander's great "Don't Knock the Rock" music movie festival.  Target will be showing vault footage from Los Angeles, SoCal and probably some SF, too.  It should be a great night!
Posted by Target Video at 3:39 PM 1 comment:

Well, mark your calendars.  The next Target Video show will be at the Cinefamily/Silent Movie Theater on Fairfax in Los Angeles.  We'll be showing classic videos with a focus on LA bands in July as part of the "Don't Knock the Rock" music film festival.  DNTR was created several years ago by Allison & Tiffany Anders.  They do a terrific job of bringing the best music material on various formats to LA.  Don't know what else they have in store this year, but we will be there!
Posted by Target Video at 8:52 AM No comments:

Tomorrow marks the 30th anniversary of Ian Curtis' death.  Back then no one could know this event would still be marked today or that so many fans of all ages would still spend hours listening to his music late into the night.  Oh, yes, and there's the matter of all those "Unknown Pleasures" tshirts.

I remember being in the studio and hearing the news, devastating news. We'd all been looking forward to Joy Division's American tour.  They were coming to San Francisco in June. The Dead Kennedys and the Mutants each were to get a slot opening for their shows.  There was always anticipation for bands coming to town from Europe.  Bands were usually known mostly by their music, or the odd interview one might catch in a fanzine.  More often than not, the new music papers in the US (Slash, Damage, Search & Destroy, New York Rocker) didn't get their shot at interviewing foreign bands until they actually came to town, so not much was known locally beyond the music.  Information was scant yet we knew something great was on its way.

Factory Records was a bit of a mystery to me at the time.  They had great bands. Really great ones. Durutti Column. A Certain Ratio. Cabaret Voltaire. And they had Joy Division.  It was never clear who was in charge, at least to me. I am sure there were others in town who were connected with the Factory people who would get the facts explained to them.  For me that morning in the studio what I understood was that Curtis' mesmerizing voice was silent.  The notion that Joy Division's arrival would lead to a surge of new music was not to be, at least in May, 1980.

Today Joy Division has hoards more fans and devotees than it ever did back then.  Devotees who never saw Curtis perform or speak.  That's the power of music and art, to compel interest and attention for the ages.
Posted by Target Video at 9:58 AM No comments: 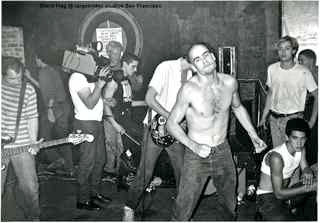 Black Flag shoot at the Target Video warehouse, 678 So. Van Ness, SF, CA
c. 1980
Now, here's a typical shot.  Joe's shooting Black Flag in the studio.  That's Chuck Dukowski on the left then Joe, then Mike Fox of the Tools, Sal Paradise of Code of Honor, Greg Gardiner and some kid I don't remember.  Oh, and Henry Rollins up center with Greg Ginn just behind him.  Black Flag shoots were a blast.  Especially swift, the band would jam up in the van, play a gig, stay up and talk about shooting a video, maybe sleep, but probably just drink and cavort. The next day we'd shoot the band.  They'd jump back in the van and drive back to LA.  Real hit-and-run stuff.  Now, actually, we knew when they were coming in advance but that was about it.  They were very by-the-seat-of-you-pants guys, but always right on the dime when you turned on the cameras.  We taped them many times with just about every singer they had. They were and are just the nicest, greatest guys.  I know they have had their arguments or whatever with each other, and that I'm sorry to hear about, but they were always cool with us.
I guess it was with Black Flag that the Teen Idles first showed up at the warehouse.  Another group of nice guys.  Joe put them to work to earn their keep or something like that.  They ended up building my loft space in the warehouse.  All they wanted from me was Coca-Colas. Go figure.  They could have asked me for anything and I would have given it, so happy was I to have a loft!  They stayed in town for a while I think and probably played a show or two.  That was how it was in SF, come to town, someone will put you up, put you to work and give you a show.  I am know it was the same in LA, but the Target warehouse wasn't just a party   house, it was like a community center where everyone worked as well as played.
Posted by Target Video at 4:24 PM 1 comment:


Jeanine, Jackie & Jill hitting the Target bar, Feb. 1980.
Photo: Linda Vestal Ratto.
On May 13, 1980 Joe left Target HQ for 3 weeks in NYC. He was off to see Jill who’d set up some shoots and probably a show. I’ll post more on that at a later date. The warehouse got a breather after weeks of activity and mayhem.

Posted by Target Video at 11:57 AM No comments: 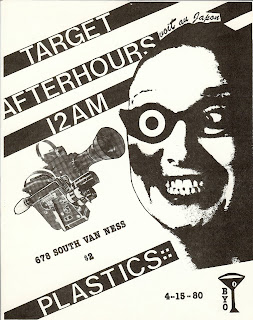 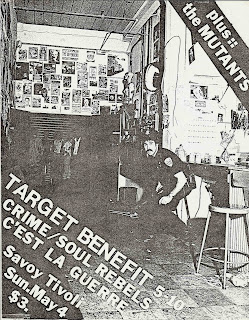 Back on Sunday, May 4, 1980, a benefit concert was held for Target at the Savoy Tivoli in SF. The Savoy was always one of my favorite venues. It was a great location to see Crime, the Offs, C'Est La Guerre and the always supportive Mutants. I did posters for the party and the benefit show that was put together to help with our legal bills/defense.
On a lowly Tuesday night (April 15) the Target was hosting the Japanese band, the Plastics, with an afterhours party. The Plastics were on tour in the US and had been in San Francisco for about a week. They'd opened for the Ramones and headlined at the Mab. During the afternoon we interviewed them, collaborating with Damage Magazine, out on the fire escape of the warehouse. My memory is that they didn't speak much English. There was a lot of buzz about them as Devo (who I knew from LA) were fans. This was a period when everyone, including Francis Ford Coppola, was interested in Japan. The Japanese were the cutting edge, particularly with video technology and all things electronic. Everyone was happy about hosting the band that night and glad to have bands showing up from that part of the world.
After the death of mayor Moscone at the hands of the assassin, Dan White, Diane Feinstein became mayor of San Francisco. Things changed almost overnight. The SF of the previous administration was gone, as were it's tolerant attitudes. The Feinstein administration generally sought to crack down on anything independent. So, what else for a new mayor to do on the night of the Plastics party but bust Target with a full on undercover, swat'ish invasion. In the end it was about selling beer without a license. Hey, we sold Buds for a buck. Oh, and I think "running a cabaret without a license."
Long story short, our friends came to our aid and we are forever grateful for that. And, it was a great show! Thanks to Vince Anton for a great photo of the bust.
Posted by Target Video at 12:05 PM No comments: 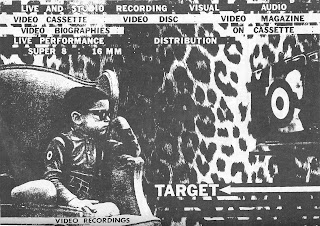 Jackie here. I run the blog and decided to start posting stories about the scene and Target goings on back-in-the-day. Most of what I have to say is based on my memory, as well as calendars and diaries I kept at the time. If you want to add to the story be my guest and comment. Please don't rant if you don't like a band or club, etc. I just want to get some of the history out there for anyone who cares. It was a great time in the music scene, for its independence, its great characters, art and wonderful sense of community... even when we were at each other's throats! Stay tuned...
Posted by Target Video at 11:51 AM No comments:

On May 10, 1980, a Saturday night, Target had an after hours party at the warehouse following the PiL show at the South of Market Cultural Center. The Center was run by a group of Samoans who didn't give a hoot about Bill Graham. It was days of strong arming by promoters and confusion by fans. The show did go on!
Posted by Target Video at 10:15 AM No comments: